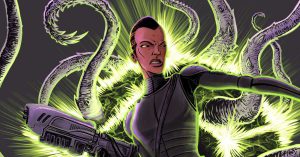 Tyger Sojac is an agent of the Reality Patrol, the vast interdimensional organization that maintains the integrity of reality throughout the multiverse. Tyger is stationed in the city of Tal Sharnis, in the chaos-warped wasteland known as the Endless Plateau.

The same catastrophic accident that tore Tal Sharnis from its native universe and transported it to the Endless Plateau also destabilized the very nature of reality in the city, leading the Reality Patrol to declare it a Permanent Interdimensional Urban Disaster Zone.

Unlike most of her fellow Reality Patrol agents, Tyger was born and raised in Tal Sharnis, in a particularly unstable district known as Feral City. She’s highly competent, but afflicted with Chronic Synchronicity Syndrome––more commonly known as Weird Luck.

Between her Weird Luck, the warped reality of her hometown, and her duties as a Reality Patrol agent, Tyger finds herself dealing with animal-headed gangsters, scheming colleagues, eldritch artifacts, mistaken identities, interdimensional conspiracies, extradimensional monsters, her embarrassingly famous mother, her telepathic alien psychotherapist, magic-wielding terrorists with cryptic messages for her, fire-breathing dogs, telekinetic mantises, mutant pigeons… and on top of all this, sometimes things get downright strange.

The storyline of the comic stands on its own, but Nick and Andrew also write other stories––mostly in prose form rather than comic form––that take place in the same multiverse and include some of the same characters. We refer to this interconnected and ever-growing collection of stories as the Weird Luck Saga.

See the Weird Luck Books page for a list of other Weird Luck stories currently in print. And check out the Weird Luck Patreon for exclusive behind-the-scenes content (sketches, concept art, videos of Mike’s creative process) and other bonus content (sneak peeks and previews, background info on the Weird Luck characters and universe, and assorted random surprises).